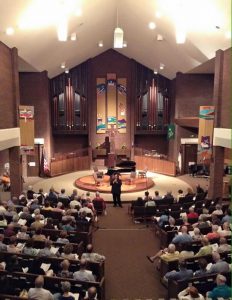 The Michigan City Chamber Music Festival (MCCMF) had its inaugural season in August of 2002. It was founded by husband/wife team Nicolas Orbovich and Sunny Gardner-Orbovich. The MCCMF operates under several guiding principals. The first priority is always artistic quality. The MCCMF attains this through the presence of world class musicians. Each of them has formidable performance skills and impressive credentials. Another is to forge and strengthen the threefold artistic relationship between great chamber music, the audience and the performer. This is accomplished through interactive presentations by the Festival Musicians. The MCCMF performers believe that oral presentation regarding the history, complexities and any other interesting aspects of the piece to be performed is vital for the audience’s enjoyment.

Nic Orbovich, co-founder, is a concert violinist with over 20 years professional experience. He has concertized and competed all over the world. It became apparent to him that his craft, classical music, was indeed dying in the United States. The reasons are perhaps too numerous to mention here, but the solution was simple: instill a passion for great music back into the average member of society. Simple, yes, but very difficult to accomplish.

A plan was hatched by Nic and his wife Sunny, cellist Wesley Baldwin, violist Rudolf Haken and soprano Melisa Barrick; to start a chamber music festival of their own as Nic and Sunny had recently married and settled in Michigan City, IN, Michigan City was chosen as the location.

There was no better place to start such a concert series. Michigan City is a typical small rust belt American town. Once a thriving industrial hotbed, MC had recently suffered severe economic setbacks with the decline of industry. Many American towns suffer the same fate.

Inspired by the area’s natural environment, history and the community’s loyalty to the arts, it is the mission of the Michigan City Chamber Music Festival to enrich the culture of Michigan City by providing free musical performances by eminent artists.

Some small cities around the US have rebounded somewhat. In most of these cases, like Hot Springs, AR and Stillwater, OK, the arts, notably classical music festivals have had a major impact. Why not Michigan City?

Of course there were detractors, but all critics were soon silenced by the unparalled success of this Festival. Numerous enthusiastic reviews and capacity crowds were impossible to ignore.

Inspired by other musical events in other parts of the country, the MCCMF is unique in several important ways

This simple formula has proven a deeply held belief by Nic and Sunny. A belief that Nic developed by witnessing over and over again through his travels and experience … that ANYONE will enjoy this music. It requires NO previous musical education or pedigree.

No, great music does not have to be “dumbed-down”, as has been tried more and more frequently. It does not have to be accompanied by gimmicks or “pop” tunes. It must, however, be presented with a love and respect for the audience, the music itself and performance tradition.

The MCCMF is proud of its unique position in the world of classical music and will continue to offer free performances for all. Future aspirations include a “traveling” series, where the Festival Musicians will take their concerts to surrounding communities, and to expand their Educational concert series. The expansion of the educational series is paramount, as the MCCMF hopes to influence school systems, public and private, to resurrect their moribund music programs.

We welcome one and all to our musical home.

Join us for an experience you will never forget!