Music That SHOULD Have Been Written for the Oboe

Jennet Ingle, world-renowned oboist and favorite of local audiences is coming back to Michigan City!  She will perform a FREE concert on February 19, Sunday, at 3:00 p.m., First Presbyterian Church, 121 W. 9th St, Michigan City, IN.  The concert is part of the Michigan City Chamber Music Festival’s “Breaking Bach” concert series and will celebrate the release of Jennet’s CD, “Music That SHOULD Have Been Written For The Oboe”.  Copies of the CD will be available for purchase after the concert at a “meet the artist” reception.  Jennet will be joined by pianist Paul Hamilton and MCCMF Artistic Director Nic Orbovich on violin!

Felix Mendelssohn’s Violin Concerto, Opus 64, has long been a favorite piece in the repertoire of virtuosos, including Yehudi Menuhin, Anne-Sophie Mutter, Sarah Chang and many others.

Jennet Ingle wanted to play it, too. There was just one problem: Ingle plays the oboe, not the violin.

Her transcription of that work — re-imagined for oboe and piano — is the centerpiece of her new album, titled “Music That SHOULD Have Been Written for the Oboe,” which she released in December via her website jennetingle.com.

Transforming a violin concerto into a piece for oboe with only piano accompaniment is not an easy task, but Ingle has done something extraordinary. She has made the thing work, and she has done so with unimpeachable convincingness.

Ingle plays regularly with several orchestras. Local fans will likely know her from her role as principal oboist with the South Bend Symphony Orchestra. She augments those duties with a combination of roles. She teaches the oboe to a vast number of students, she makes and sells reeds to an even larger number of oboists, and she maintains a fascinating oboe blog on her website.

One huge problem that she had to overcome for her album was the pesky detail of double- and triple-stops in the Mendelssohn piece — places that call for the soloist to play two or three notes at the same time. An oboe can make only one note at a time.

“I had to rewrite the first movement’s cadenza extensively,” Ingle says. “Certain string techniques fit the violin very well but do not fit the oboe at all.” Nevertheless, she made Mendelssohn’s glorious melody line fit her own instrument perfectly.

Ingle has been toying with this idea for years. As early as 2004, she programmed concerts with the “Music That SHOULD Have Been Written for the Oboe” theme. The repertoire has changed quite a bit over the ensuing years, and she wisely refrained from recording until the time was right. 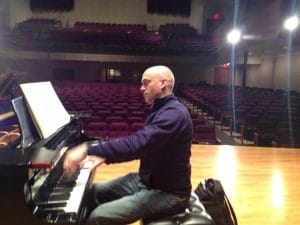 Now she has turned the idea into an album with some solo pieces and some with the accompaniment of pianist Paul Hamilton, recorded with expert help from Sweetwater Studios in Fort Wayne.

The project begins with three short works by Debussy, including his “Syrinx,” originally written for solo flute. The myth upon which the piece is based revolves around the romantic intrigue in which the god Pan falls in love with the nymph Syrinx, only to find her transformed into reeds, which he vindictively severs. The composition works as well with the oboe as it does with the flute.

“Of course, oboes are all about reeds. On the oboe, I can do such long phrases, which is not a thing a flute can do,” she says. “They have to breathe a lot more.” She can also pace it to her own preferences. “I can play it Impressionistically as well, as a series of sounds and effects,” she says.

The Mendelssohn concerto is the major work in the first part of the CD, and the second half features an arrangement of J.S. Bach’s Violin Sonata No. 6. Ingle envisioned a running order for the album that made sense in the way that LP records break into two sides, with smaller works helping to frame the huge pieces. The album ends with the divine austerity of Bach, for example, then the jazzy nuances of Gershwin preludes and a final brief Ravel dance, the “Pièce en forme de Habanera.”

“I have multiple pages in my journal where I was trying different orders, and I worked with my husband (fellow musician and bassoonist Steve Ingle) on this, because he has a great ear and a great sensibility,” she says.

The flow of the album works quite well, with the huge Mendelssohn piece followed by the famous Chopin “minute waltz.” “I thought of it as a palate-cleanser after the monumental, 30-minute concerto,” she says. “I wanted something more delicate there.” As an added treat, Jennet will be joined by long-time friend and colleague, concert violinist, Nic Orbovich in an arrangement of J.S. Bach’s beloved “Little Fugue in g minor”!

Admission to the concert is free, and a reception will follow the performance.  For more information, see www.mccmf.org or call (219) 561-1939.